Alpine towns are embedded in different spatial contexts. They are located in large urbanised valleys, mountainous landscapes, or at the Alpine fringe. Many Alpine towns share a ‘scaling issue’: Despite their small size, they hold functions that elsewhere are usually provided by much larger cities. Socio-economic growth trends in Alpine towns are mostly above the European average. This comes with a series of challenges for sustainable development and spatial planning. Part 1 ‘Facts, Maps and Scientific Debates’ of the RSA9 takes a look at the performance of Alpine towns and the reasons behind it. In addition, it discusses the contribution of towns to challenges affecting sustainable development in the Alps, and their role in the solutions of these challenges.

Most Alpine countries classify settlements with a population of more than 10,000 inhabitants as cities or towns. Leaving out smaller towns in the Alpine context would result in a rather ‘empty’ map. However, many medium-sized and small towns provide vital functions and play an important role in the region’s spatial organisation. In the report, the definition of a town also tries to represent its functional role.
The result is the map to the right.

It reveals important spatial characteristics: An urban fringe surrounds the Alpine perimeter, while the inner-Alpine area has considerably fewer towns. The spatial orientation of inner-Alpine settlements is mostly linear, often in urbanised corridors along large valleys. Some small standalone towns are evidently important for their local context. This chapter examines what relevance towns have for the Alps, how we can deal with urbanisation and land-use patterns and how we can manage multi-functionality while maintaining quality of life for all. 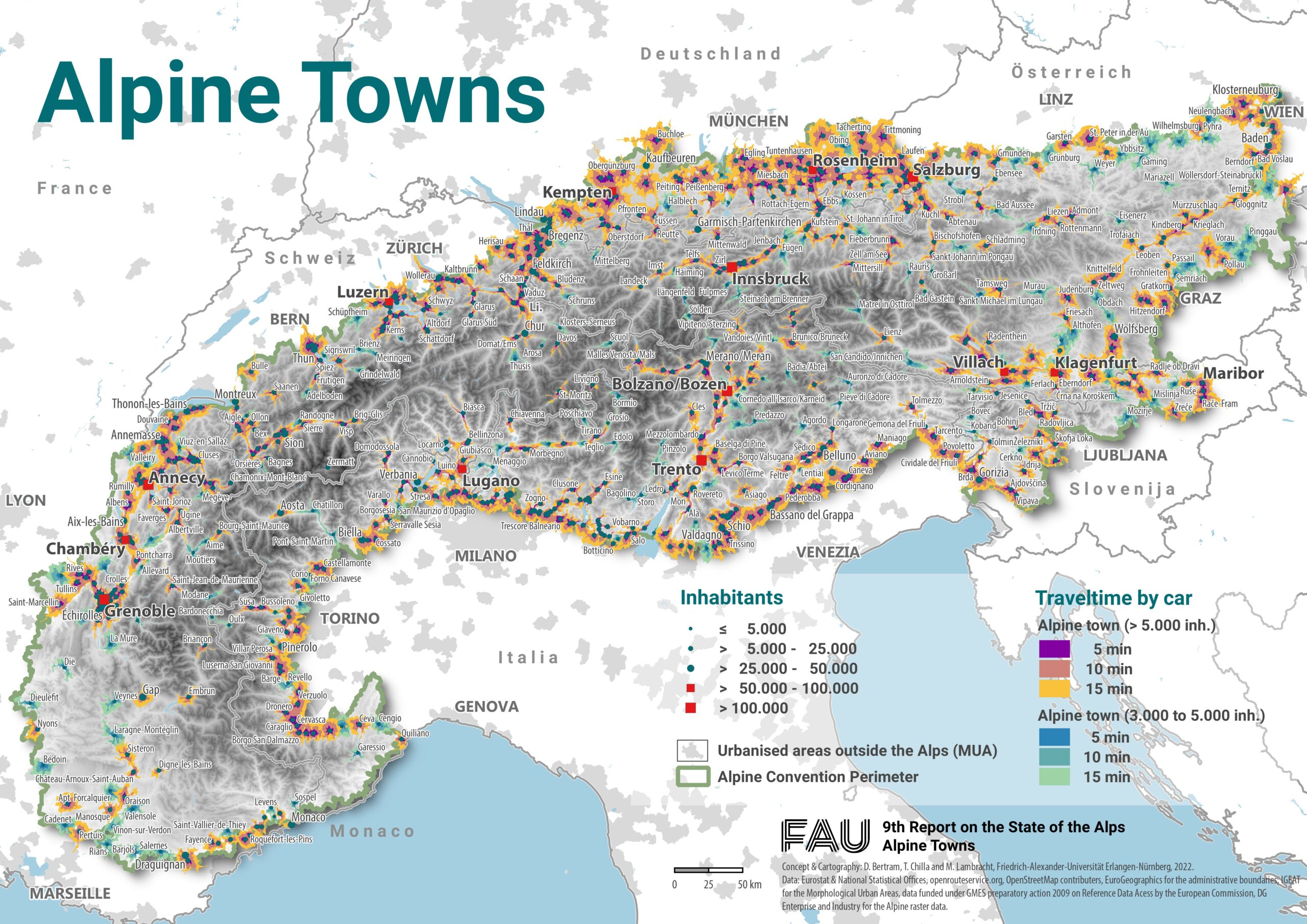 Over the last decade, population growth in Alpine towns has been nearly four percent. Alpine towns have grown slightly stronger than rural areas, which can be seen as a sign of moderate urbanisation. Interestingly, the demographic statistics do not confirm a structural disadvantage of small towns ‘shrinking’ – at least for the current decade. All territorial categories have developed in a more positive way than the European average. However, there are clear differences between the development trends of towns depending on their national affiliation. This chapter examines how population growth links to urbanisation trends, how settlement size is linked to age structure and what the demographic pattern implies for socio-economic developments. 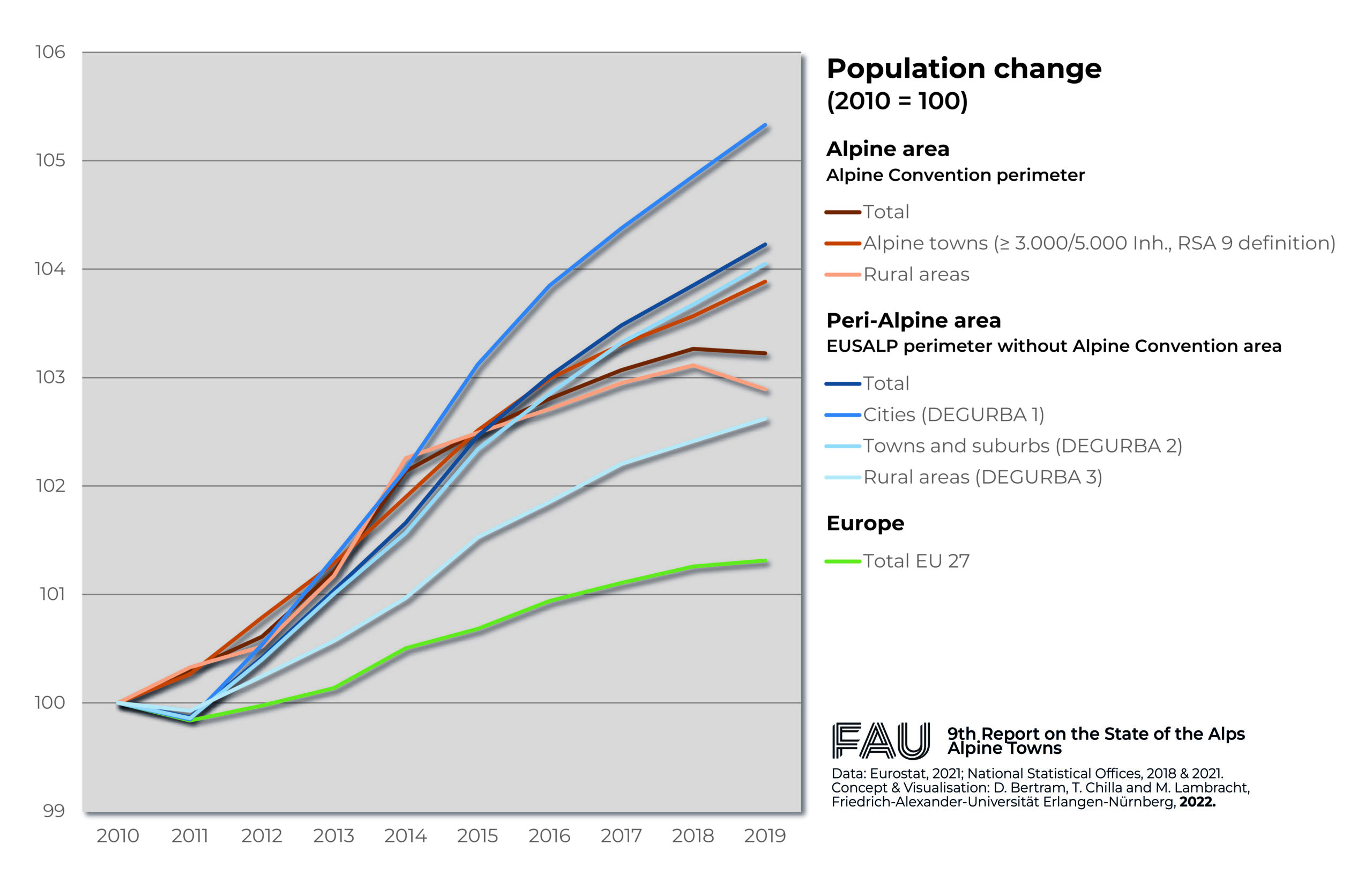 This is of great importance beyond the mountain areas as well: large parts of Bavaria, Lombardy and other regions depend on ecosystem services provided by the Alps. Decreasing quantities of water and a reduced reliability of supply will become major issues in the coming decades. This affects not only the drinking water supply but also agriculture, energy production, and industrial cooling demand. The chapter examines the patterns of water consumption, temperature rise and land demand. It discusses how Alpine towns can become frontrunners in times of environmental change. 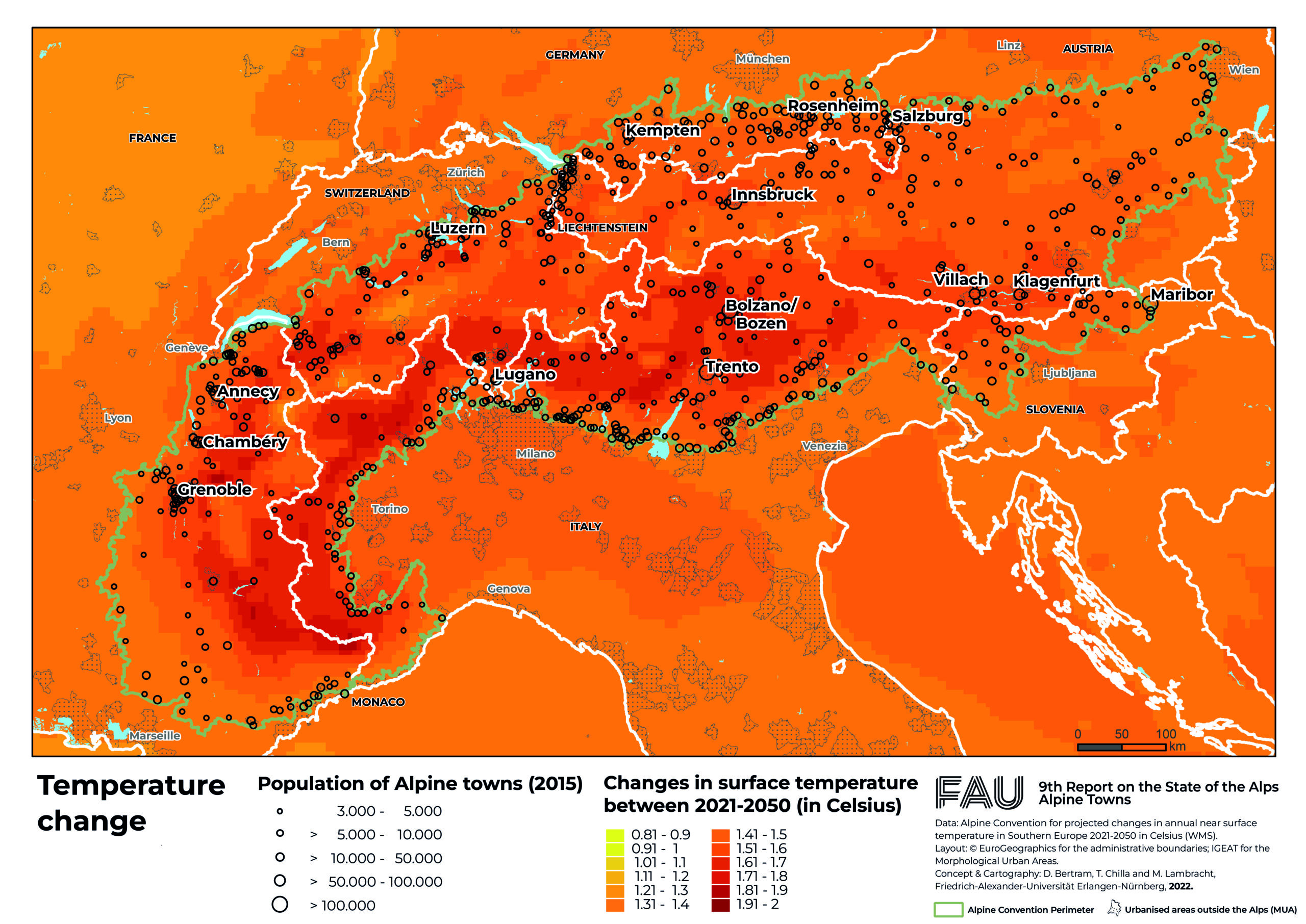 Labour markets are amongst the most crucial functions of towns and cities. They provide jobs for many residents from the rural surroundings. Typically, also most of the technological and business innovations originate in urban environments. Many towns with high labour market centrality are in the inner parts of the Alps. Apart from these places, we see typical commuting patterns (e.g. Monaco, Luzern, Torino, and Vaduz). While the overall employment trend is positive, the situation in the northern part of the Alps seems to be more favourable than in the south. At regional level, Alpine towns can play an essential brokering role: Rural areas around the towns not merely serve to supply the labour-market in a one-way relationship, but are part of a dynamic with spill-over effects in terms of innovations and business foundations. This chapter examines the employment situation, educational institutions, accessibility, tourism capacity and digitalisation. 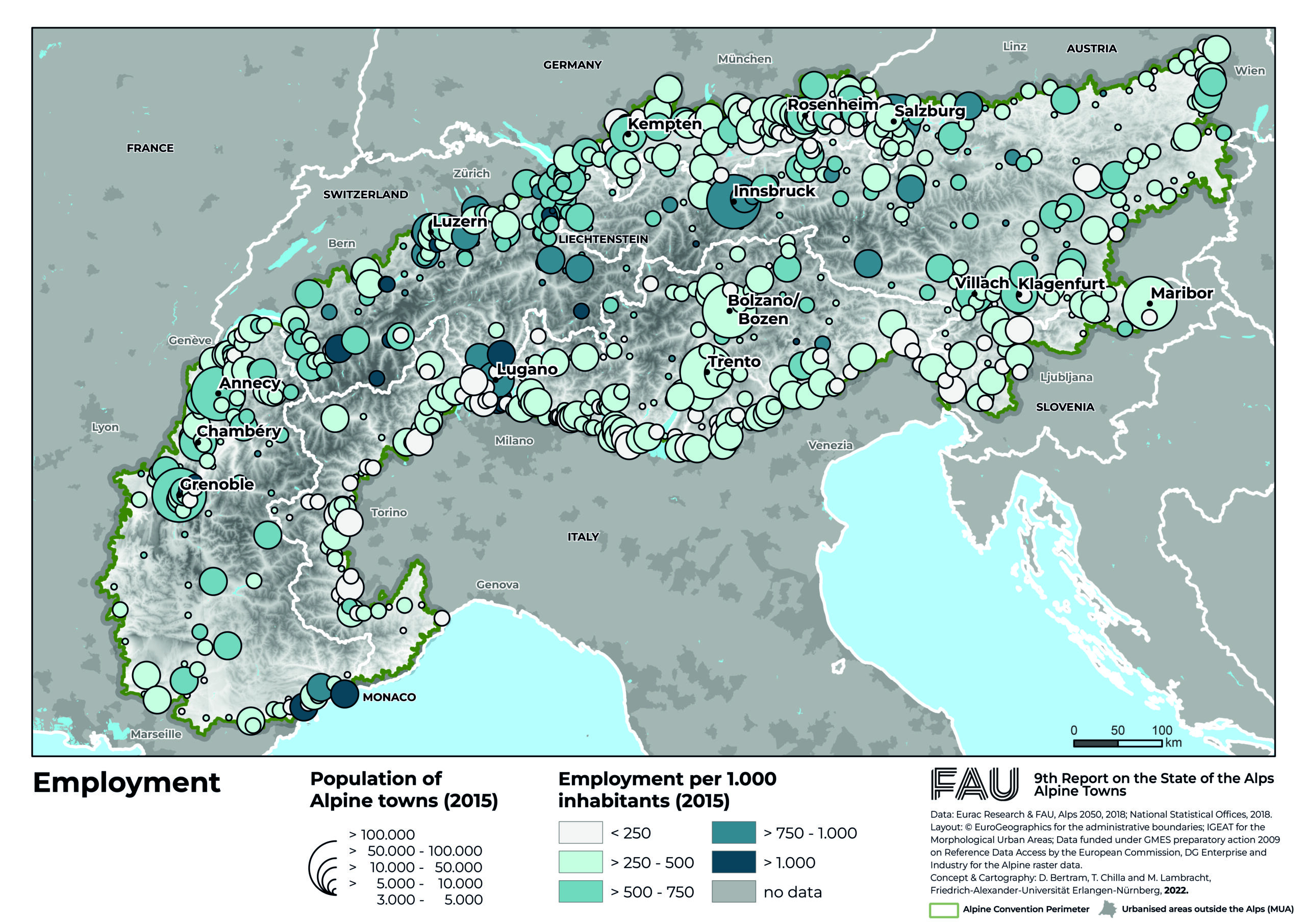 Alpine towns are important socio-economic hubs for larger surrounding areas. At the same time, they have to deal with global dynamics: economic and geopolitical shifts raise fundamental questions for Europe in general. To understand the current global shifts, demography is an important indicator. In this respect, the Alpine regions and cities are above the overall European trend but far below the global average. The current economic development serves as a second indicator, which shows that European territories must reflect on their position vis-à-vis global dynamics. For Alpine towns, maintaining prosperity and balancing international and regional economies is a major challenge. This chapter refers to findings and debates related to global trends. 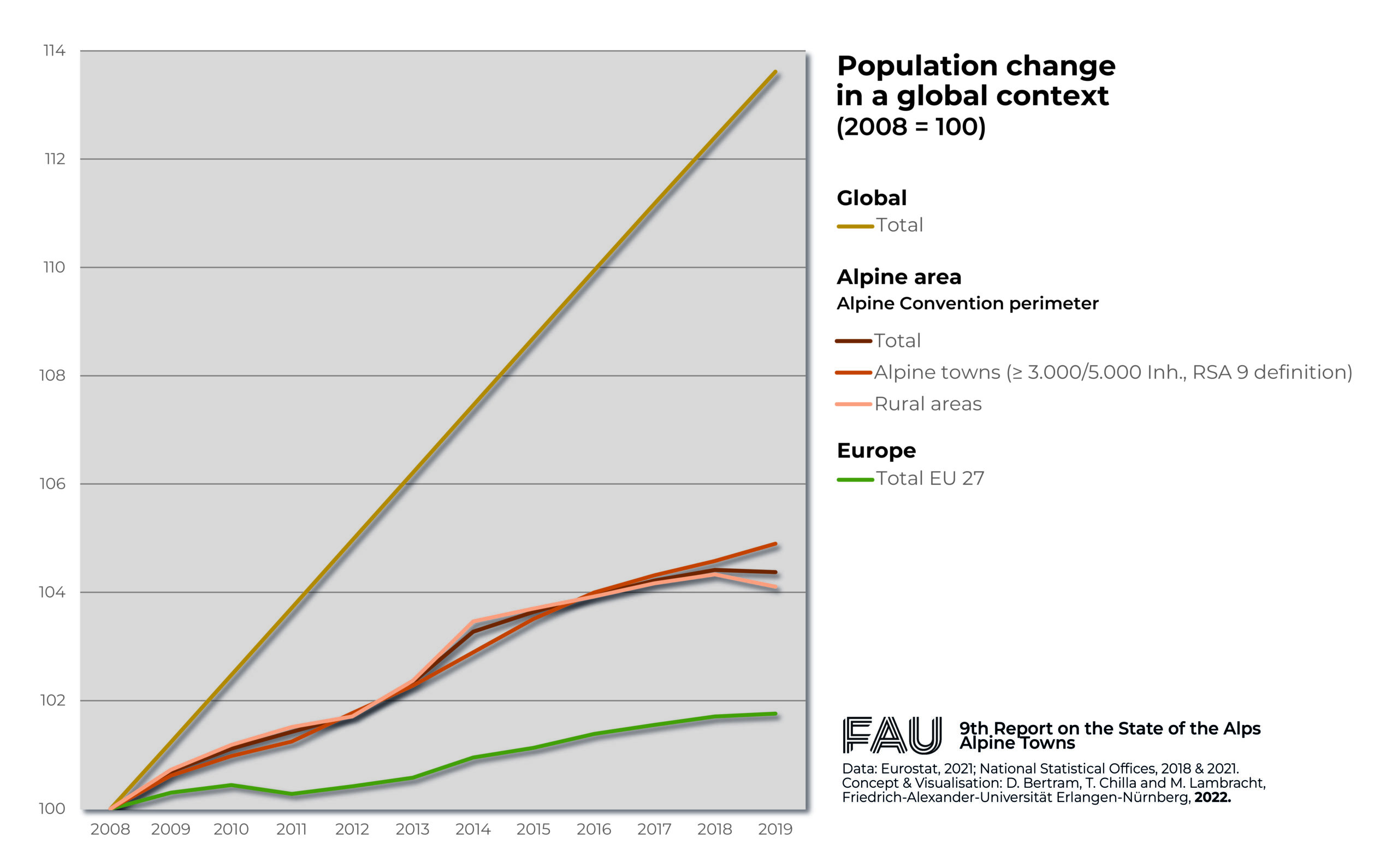 The Alpine settlement system spans eight countries. National borders are ‘contact zones’ where different political systems and cultures meet, posing a challenge for sustainable development. Cross-border and transnational governance tools that complement conventional instruments are important in this context. Moreover, cross-border cooperation needs to involve not only public representatives but also economic actors and the civil society of the Alpine region. Alpine towns are often involved in networks that include regions and cities beyond the Alps (e.g. in the framework of Interreg), which underlines the importance of participation in European networks. This chapter examines governance from four angles: thematic cooperation patterns, city networks, cross-border integration, and ‘soft space’ governance. 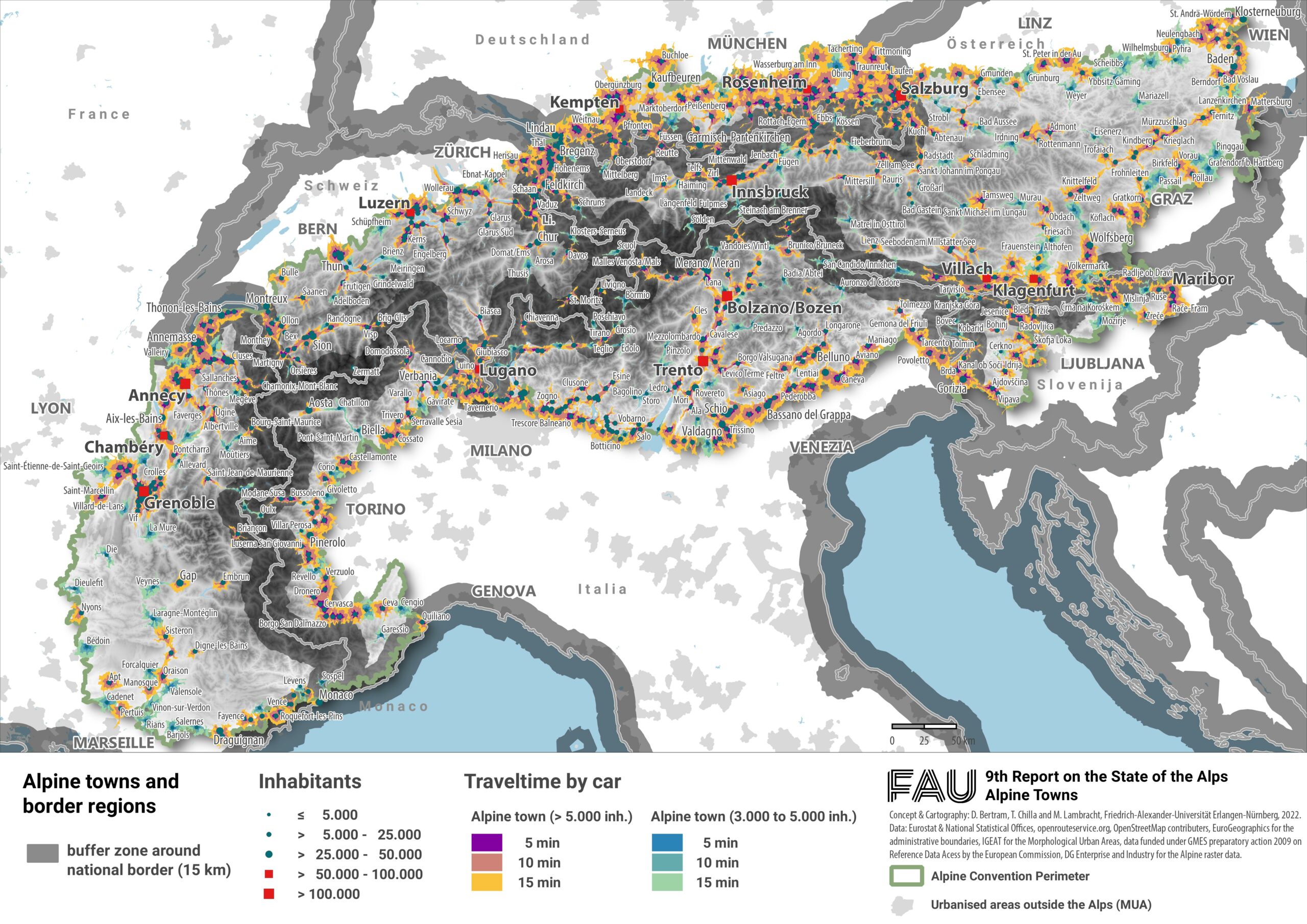 Five Pictures of the Future